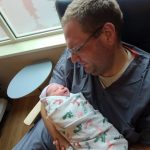 This week our family lost a gentle giant. Our nephew succumbed to pneumonia after surviving a bout of Covid. He will be missed.

A big man with a bigger heart, he stood every inch of six feet four. He owned his own business and was well respected in his community. He and his wife had been together since  their freshman year in college. They added two children to their love nest several years later—a son and a daughter.

The father and son were inseparable. The six-year-old already knew how to mow a lawn with a gas-powered mower, could drive a go-cart around a track at mind-boggling speeds, and played T-ball with the best of them, his father cheering from the stands.

The daughter had yet to turn six months old. Being carried in her father’s arms will become a fading memory. Her recollections of Dad will be formed from framed pictures on the mantle.

Our nephew had health problems in recent years. Fighting hereditary DNA that affects all our family, he’d struggled to overcome the deficits handed him. A life coach helped him reduce his inborn tendency to overweight. Hikes with his family—the baby on his back and the boy at his side—helped strengthen his heart and improve his lung function. But the effort proved too little, too late as his body surrendered to a disease that relentlessly claimed him.

Well-wishers from his community paid tribute to a life well-lived.

From a family reunion: “He was a wonderful person and a favorite cousin. I am grieving for his whole family!”

Another wrote on his timeline. “He was a treasure. So tragic. He will be sorely missed.”

And still another: “Just really got to know him the last few years. Their visits were always fun. This year he helped us with the apples that were all over the yard.”

Clearly our nephew understood the value of family and friends and lived the Scripture found in Matthew 6:19-21:

And so we say goodbye to a man whose life ended thirty years too soon. Thank you for being amazing.

2 Replies to “When Life Ends Too Soon”