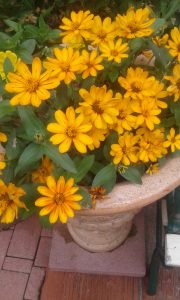 This week my husband lost a relative who will be dearly missed. At every reunion he sought this man out, sat and shared stories with him for hours, and went home rejuvenated by his time in the man’s company. The man always had a story to tell, a testimony to share, or a bit of wisdom from God’s word to impart.

He wasn’t a big man. He didn’t stand six feet tall, nor was he built like a lumberjack. Slight of build and soft of voice, he nevertheless impacted those around him with the force of a giant.

On March 11 he was diagnosed with the advanced stage of growing pancreatic cancer. Three weeks later he’s gone.

I didn’t know him well, but family members told of him walking through the house singing hymns of praise to his Lord.

He faced his death the way he lived his life, praising God, telling Bible stories, making sure everyone around him knew of the Good News of a living Savior.

At the end, while being cheered on by a great host of heavenly witnesses, he finished the race and completed the course set before him while he was met by our Heavenly Father.

I can hear the Savior saying, (Matthew 25:21 ESV) “Well done, good and faithful servant! You have been faithful with a few things; I will put you in charge of many things. Enter into the joy of your master!”

I want to leave that kind of legacy. Imagine being remembered because I  played a part in someone finding their way to heaven! That something I wrote turned a sad and depressed soul around, sent them seeking the God of the universe.

One of this man’s granddaughters told how he sang old hymns and recited scripture, ministering to her  right up until the end of his life. What a tribute to a fellow who humbly obeyed the commandment to go into the world and preach the good news.

Thank you, Ray, for setting the bar high. You will be missed. But because of your testimony we will see you again. Thanks for taking us with you.

4 Replies to “To Leave A Legacy”