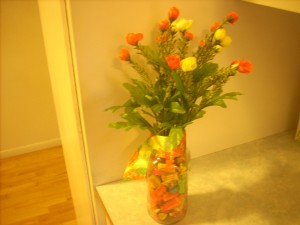 This week we said goodbye to a long time neighbor. He’d lived for years next to my husband’s family and then when we purchased the family home he became my neighbor as well.

I met him the first time at our wedding reception. He really liked cake. During the early years of our marriage, I sometimes fixed him plates of cookies at Christmas. When his health turned, he could no longer eat them.

He lived as a recluse, keeping to himself, interacting with few, but fiercely independent. He loved the color red—refreshing the trim on his house, garage door and wooden fence every summer.

Conversations with him were strained. He tied his reality to the television news. Whether a tornado touched down in Kansas or a hurricane hit Florida, he’d worry about the aftereffects, comment on its outcome.

He worked as a groundskeeper at a local cemetery. Bouquets of fresh flowers wilted, but the plastic arrangements had to be removed. Rather than trashing them, he planted them around the perimeter of his yard.

As advancing age claimed his strength and the police withdrew his license to drive, he’d pull his wheeled cart to the grocery store, dressed in a yellow rain slicker. My husband and I worried about safety, his slow, mincing shuffle limiting his mobility. Offers of a ride were refused.

His brother from California kept close tabs on him. As his health deteriorated, the brother asked if we’d mind mowing the yard. We were glad to have something to do. When a tree hit his roof, my husband removed the limb.

Sitting in his memorial service this week, I learned of his travels—to the Grand Canyon, Texas, California. He decorated his home with pictures of beloved locomotives. His collection of 45 rpm records numbered fifteen hundred.

At the close of the service, grace-filled scripture about eternal life in Christ was read. The Lord’s Prayer was recited. More things I never knew, but which gave me hope. Someday I may very well be greeted by my neighbor as I enter heaven. I’ll tell him then what a great neighbor he was.