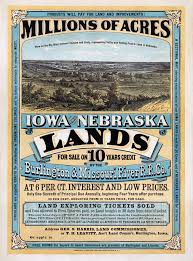 My great-great-grandmother had experience dealing with the wilderness long before she met her frontier-bound husband in 1846. Her father came west to Iowa from Ohio in 1841, hoping to find a tract of land among the six million acres the government acquired in the Black Hawk Purchase of 1833. The move was the second of the family, having migrated west from Massachusetts earlier. The farm they sought came at the end of a bitter dispute.

In 1804, a treaty gave the Sauks and the Mesquakies all the territory west of the Mississippi and the government kept all tribal lands to the east. The natives were compensated with an agreed upon $2,234.50 gift in goods as well as an annual stipend of $1000 thereafter. They were also promised that no further settlement by white men would occur west of the Mississippi.

Four years later (1806) the government crossed the river and built Fort Madison. Many tribal leaders believed that the government act of building the fort ended the treaty. Still other chiefs, including Black Hawk, felt the original tribal leaders authorizing the 1804 treaty had no right to sign away Indian lands. Hence, they continued to live on ancestral grounds.

In 1830 Black Hawk returned from an annual hunting trip to find white settlers occupying his village, homes that were east of the river, but belonged to the natives nonetheless. Black Hawk expelled the settlers by threatening violence. The white settlers complained of their treatment and the government moved in.

What ensued was the pursuit of Black Hawk and his followers by a group of militia men which included Captain Abraham Lincoln. The tribal leader sent a party carrying a white flag with the intent of establishing peaceful communication. One warrior was shot. Two were taken prisoner. When the warriors continued to advance, three were killed. Black Hawk declared war and the militia complied.

By 1833 all of the Sauks and Mesquakie Indians had either been forced north and west, killed by Sioux, or captured by the militia. The treaty of 1833 surrendered tribal land that would become eastern Iowa, parts of it within the borders of Wisconsin and Illinois. Settlers learned of six million acres waiting to be claimed and rushed to make their grab.

My great-great-grandmother was thirteen when her family moved to claim their farm in Iowa. Wilderness awaited them as well as fertile acreage. She wouldn’t venture further west again until she was twenty-three. Ten years to prepare for her pioneer existence.