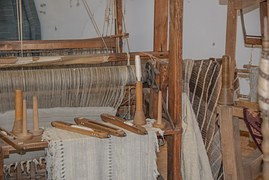 My great-great-grandmother’s reputation as a seamstress was well-known. She owned both a spinning wheel and a small loom. During the four years she waited in Iowa to join her fiancé on his Oregon homestead, she made blankets, comforters and patchwork quilts she’d need for life in the wilderness.

Though imported textiles were available to buy in the mid-nineteenth century, many women retained their spinning wheels and looms as a source of home-based security. Early on, the colonists were determined not to be dependent on imported goods. Money was in short supply and local production was considered advantageous to the growth of the colony.

As the European textile industry grew, the varieties of cloth also expanded and included broadcloth, velvet, satinet, nankeen, chintz, calico, linen, cambric, and flannel. Availability of the commercial cloth, though, depended on where one settled, the further west the pioneers traveled, the less likely a woman was to find what she needed to clothe her household. Spinning cotton or woolen thread from a wheel and weaving it into cloth on a loom were considered important survival skills as the country’s population continued to sprawl.

A spinning wheel could produce flax, wool, and cotton thread. Each fiber called for a different kind of wheel, but often these were interchanged. While making wool thread, the spinner would walk back and forth, holding wool in one hand and rotating the bigger wheel with the other. Smaller wheels spun faster, and since they were powered by a foot pedal, both hands were free to work the longer strands of flax.

The size of  the loom varied, often dependent upon the breadth of the operator’s reach. Shoving the shuttle through and catching it on the other side had to be mastered. Often the cloth was only two or three feet wide to accommodate the weaver’s arm span. The treadles were moved by the feet while the hands kept busy propelling the yarn through the maize of warp threads that created the woven cloth.

My great-great-grandmother’s ability to stitch and mend remained with her as she aged. Her grandchildren remembered her as the woman who came, visited, and emptied the mending basket. She passed her love of weaving to her granddaughter, who became my grandmother.

My grandmother wove rag rugs on a loom she kept in an upstairs bedroom. I still remember the hand woven fabrics lining the stairs in her home. Sturdy and tough—they never wore out.