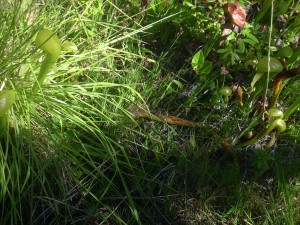 Under cover of darkness, the men aboard the Hackstaff let down lifeboats and rowed to the north shore, avoiding discovery by Indians they’d seen walking the other side. Fall weather remained warm and they didn’t need heavier attire. They crept along the riverbank, each man carrying a portion of what few foodstuffs had remained on board. Little else could be carried. My great-great-grandfather kept his sack of gold.

Once safe, the men discussed their plight, deciding to walk north and connect with the trail between Oregon and California. Without horses, supplies or adequate weapons, many feared they’d become lost or separated. Several hadn’t before survived wilderness conditions. Uncertain where they went aground, historians believe the ship beached at the Rogue River. The distance home could have been more than two hundred miles—on foot.

The terrain proved difficult. Brushy undergrowth and steep climbs tested the hardiest among them. Two men with rifles hunted game. Three deer were shot, gutted, and roasted over a meager fire built with a few dry matches left in one man’s pocket. The famished men used sticks to broil the meat over the hot coals, eating the venison with their fingers and without salt. Hunger needed no extra seasoning.

Trekking north once again, another man scored an elk. But several were too hungry and weak to eat the meat. Searching the area for other edibles, they discovered slugs and offered them to the starving. Though disgusting, the forest fare proved providential and the sickly regained strength enough to travel, though the exertion again took its toll.

Many reached the point of giving up once more until they found a mountain stream which provided  crayfish. Without any means of building a fire, they ate them right out of the shell.

My great-great-grandfather buried his sack of gold beneath an oak tree, the weight of it too heavy to carry. Though later he would return to search for the treasure, he never recovered his fortune.

Not knowing where they were, my great-great-grandfather discovered the trail they’d hoped to intersect. Spotting a dog running toward them, the men thought of eating it, but not before his master, a trapper, appeared. The man had no way to help them, but encouraged them to continue a little ways further where they would find other settlers. They did, and soon were on their way home.