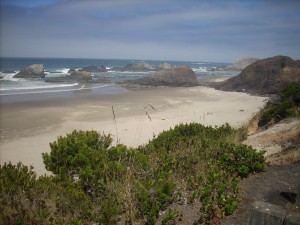 The Hackstaff left San Francisco Bay with twenty-seven passengers aboard and provisions for a fourteen-day voyage up the Pacific Coast stowed securely within the belly of the vessel. Soon, though, those aboard grew wary, as the captain seemed to have lost his bearings. The captain, bewildered by the whims of the Pacific Ocean, admitted he was adrift. A relentless, turbulent wind had pushed them further and further away from their destination. The captain thought they’d been driven south of their San Francisco launch, rather than north.

With the water supply dwindling and no sight of land around them, the travelers realized they’d have to find fresh water soon. The ship sailed into what appeared to be the mouth of a river. The captain and crew dropped a lifeboat over the side and proceeded to row into the opening. Soon, though, they sighted Indians waiting on the shore, war paint covering their faces. Not recognizing the tribe, the sailors turned the rowboat around and headed back to the mother vessel.

Setting sail, they crept along the coastline, even though the dangerous rock formations had not yet been charted. As the wind died down, the tide propelled the ship nearer the rocky seashore. Long oars were shoved over the side, the sailors pushing the craft away from the beach’s edge with only the strength of their backs and arms to save them. Finally, the wind changed and carried them back toward the open ocean. Their need for water had grown to crisis status.

Another river mouth was sighted and they inched their way over the bar and crept cautiously inland. One man was posted in the crow’s nest checking the channel for clearance, and another sailor waited at the bow, testing the depth. Though the ocean swirled with silt, they believed another hundred feet would give them fresh water.

With a thud, the ship came to an abrupt halt. The vessel slid into a sandbar and stuck. The crew waited for the next high tide, and when the surge finally arrived, efforts to float the ship back to sea proved futile. They ran from one side of the craft to the other trying to rock the bottom free from the sand, but to no avail. The ship only sank deeper into the mire. Frustration turned to desperation. Soon all would be lost.