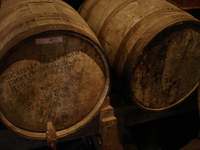 When my great-great-grandfather left his family on the east coast and headed west, he brought two important skills with him. He had apprenticed as a cooper, working for the Syracuse Salt Works, making fifty cents a day. He had logged in the woods as well, learning the skills a frontiersman would need to tame the virgin land he sought.

A copper was an important, if not revered, tradesman in the early 1800’s. This was the fellow who used curved wooden staves to make the barrels, casks, and buckets needed to transport just about everything imaginable. These containers usually bulged in the middle, kept round with hoops strategically placed around the outside to bind the vessel together.

Before the days of boxes and plastic packaging, dry-tight coopers made barrels and flasks to encase goods like flour and gunpowder, while wet, or tight, coopers made containers for long-term storage or transporting liquids. White coopers made straight-staved washtubs, buckets and butter churns, useful for holding water or other liquids, but these items weren’t useful in shipping. Settlers crossing the prairie needed well-built cooperage to carry the foodstuffs critical for survival in the days ahead.

My great-great-grandfather had remained in Syracuse when his family moved to Wisconsin, but an injury to his foot prompted him to join them a little later. He helped his father build a house of hand-hewn timbers as well as feed a family of thirteen siblings. The dinner table was kept stocked by hunting and fishing. A short time later his uncle needed assistance building a railroad in Michigan, a venture that would ultimately fail, but an experience which honed my great-great-grandfather’s logging skills.

He arrived in the wilds of Oregon with valuable knowledge necessary to prove up his donation land claim. Four years in untamed territory wasn’t much time to make a home, but many adventures awaited him when he rode into the Willamette Valley.