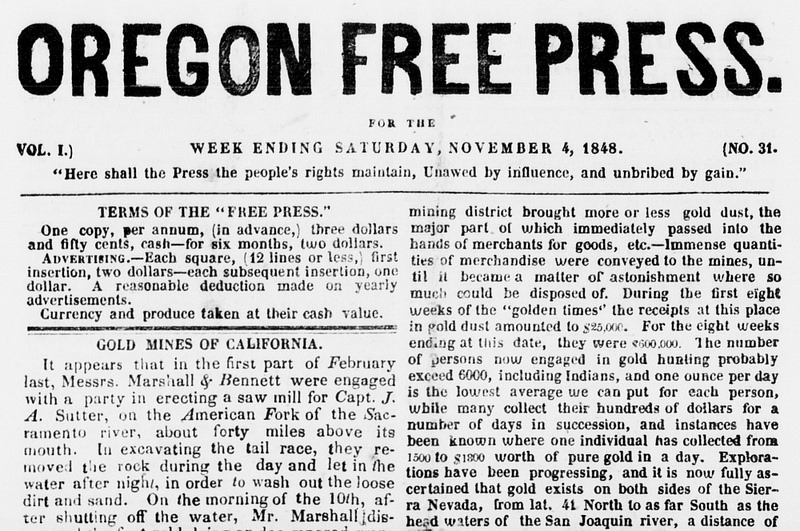 Sent by his employer to build a new sawmill, James Marshall, an emigrant from New Jersey, was inspecting a ditch on the morning of January 24, 1848 when he looked down into the water and thought he saw gold. He reported the find to his boss, Johann Sutter, a Swiss emigrant to Mexican California, who had conned his way into ownership of a rancho in the Sacramento valley.

Sutter wanted to keep the discovery quiet. He was a successful farmer and herder with ambitions of becoming the head of an agricultural empire. Sutter’s Creek had been named for him and he owned the sawmill Marshall had been sent to oversee. Mining for gold hadn’t made the land baron’s agenda.

This happened to be a quiet time in the nation’s history. The economy was slowly regaining ground after a depression.  Mexico had lost its war with the United States. The  problem of ownership of the Oregon territory, which had threatened to produce conflict between the United States and Great Britain, had been diplomatically resolved. Settlers like my great-great-grandfather migrated to the call of free land.

Soon, though, the rumors of gold on the South Fork of the American River spread. By July, 1848 Oregonians had heard the news and the report spread to the East coast later that summer. My great-great-grandfather couldn’t resist the claims of fabulous wealth and decided to head south. Much of the route south of Ashland was unimproved, and travel over the Siskiyou mountains proved treacherous. But with the goal of realizing all of his hopes and dreams, he ventured on. When he arrived, he staked a claim and began his search. Soon his life would take a very different turn.