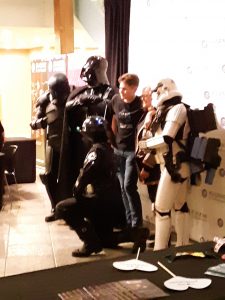 Last Saturday our local symphony hosted a movie and music event featuring the popular second chapter of the original Star Wars trilogy. The movie played on the big screen while John Williams’ iconic soundtrack was performed live by the Eugene Symphony. Last year fans packed the concert hall for A New Hope the first installment of the story. This year Luke, Leia, and Han ran into Imperial trouble and fans were no less excited.

My son and daughter attended the event. They were quite impressed that the live performance added another dimension to the musical score that has already inspired millions.  I understood their enthusiasm. I had attended two other movies with music before—The Wizard of Oz and Amadeus. Both were fascinating to watch as the orchestra played as one while the drama unfolded above them.

Unique to this movie—Star Wars—were the costumes—or as my son called them—cosplay characters who greeted the attendees prior to the concert. Many had their picture taken with the likes of Darth Vader, the Storm Troopers, and Mandalorian. The line for pictures trailed up the stairs.

If you have opportunity to attend a performance like this, I highly recommend doing so.