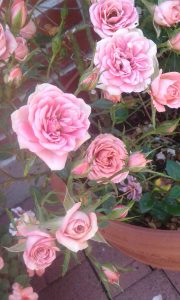 Though where you live will determine how spring arrives on Sunday, the day represents a benchmark for the change of season. Some of you are still ankle deep in snow while others are donning t-shirts and flip-flops. All sorts of astronomical explanations abound for the phenomenon, but it’s safe to say spring is here.

The first day of spring signals me to think about summer flowers. When I first gardened early in my marriage, my efforts amounted to a vegetable plot and a hanging basket or two. Now, with years of cultivating experience within my gloves, I plant flowers with a therapeutic approach.

My garden has become a sanctuary of sorts, a place to sit, reflect, and unwind. Here I can wrestle with the day’s problems, listening to the fountains spray water on waiting ferns, watching while hummingbirds hover in the never-ending stream that the cherub pours from his urn.

God placed Adam and Eve in a garden. He met them there. Genesis 3:8 says, “And they heard the voice of the Lord walking in the garden.”

Jesus spent many hours praying in this kind of setting. He took his disciples to Gethsemane before his crucifixion and asked them to wait while he petitioned the Father. When finished, he returned to a scene of sleeping bodies and asked, “Could you not have watched with me for one hour?” (Matthew 26:40)  Indeed, Jesus understood the solace a garden offers, a refuge from the demands of the world, a place where the mind can heal and the heart can thrive.

I wonder if C.Austin Miles, the creator of the age-old hymn, In the Garden , also experienced the calming effects of a backdrop filled with living, growing specimens. The words of the hymn* suggest he did:

I come to the garden alone, while the dew is still on the roses

and the voice I hear. . . The Son of God discloses:

He speaks, and the sound of His voice is so sweet the birds hush their singing. . .

*Portions from the hymn by C. Austin Miles

May you find a place where your soul can rest.