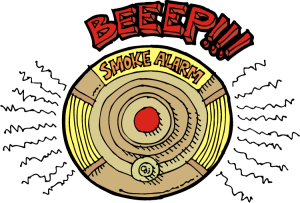 The piercing whine coming from the hall could mean only one thing—something I cooked in the kitchen had set off the smoke detector. But what?

The bigger surprise came in the when of it all. Our smoke detector had quit working a while ago. When had my husband installed a new one without my knowledge?

And it was there. Screaming its warning to all who would listen. A wave of the hand wouldn’t silence it. Only the reset button worked to bring quiet again to the house.

Smoke detectors are considered an essential preventative measure in our homes today. Stories abound of lives saved because the smoke alarm alerted the sleeping family within a structure that somewhere fire and smoke were raging. Safety is the first consideration.

But in my incident,  I’d merely gotten the broiler pan too hot. A little smoke rose up from the grease, drifted down the hall toward the bedrooms, and tickled the alarm’s sensor, setting it off and testing my sanity.  Not long after that another kitchen drama found its way to the smoke alarm.

My circulating fan doesn’t help. A ductless device which swishes the air around my kitchen, it merely thins whatever catastrophe I’ve created, but does not eliminate it entirely. I’d just have to be more careful. Keeping my sanity was important.

God tells us in his word that we are not immune from the trials of the world. In Matthew 5:45: “He causes his sun to rise on the evil and the good, and sends rain on the righteous and the unrighteous.” A man made safety device is not interference with his plan.

This morning I prepared to leave for a women’s function at church. Halfway through my shower the smoke detector sounded. I called to my husband, asking what had happened. “Just the toaster,” he said. “Bread stayed in a little too long.”

I relaxed. Though annoying, the newly installed device was earning its keep.

Except for one problem.

This morning’s toast incident was the first time my husband ever heard it go off. He’d sleep through any emergency.

Time for a plan B.