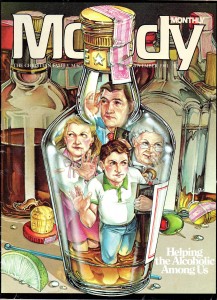 While listening to announcements at the Oregon Christian Writers conference last weekend, I noticed a tall, elderly gentleman mount the platform stairs and approach the podium, crossing the stage like one comfortable in front of a crowd.

He stated he owned a small press and, at 88, was going out of business. He encouraged the audience to inspect his books in the lobby, all reduced to sell. As he descended the steps to the main floor, I realized I’d known him many years before. Reading his name tag—Professor Dick Bohrer—confirmed what I’d believed. Here stood someone to whom I owed a debt of gratitude—a man willing to encourage beginners and see them succeed.

When I first met Dick Bohrer, he was the senior editor at Moody Monthly, a Christian magazine based in Chicago. I’d recently begun freelance writing, having married and quit my job as an in-house editor.  Bohrer bought my first article. One of his letters, a letter I kept, said, “You tie a neat package.” He left the magazine about two years later and I lost track of him.

I had seen him before at OCW, but I wanted to connect again with this man to whom I owed so much. I said, “I doubt if you remember me, but you were the editor at Moody Monthly when I first started writing freelance articles. You gave me my first sale.”

He looked up, his eyes brightening as he read my name badge. “I remember.” He nodded. “What are you writing these days?”

I told him, catching him up on thirty years. “I wanted to thank you for being the catalyst that launched my writing career.  That first sale gave me the courage to continue on.” I smiled. “I haven’t forgotten.”

As we parted I wondered how many of us have an opportunity to thank the person who helped us begin years before, to tell them what their act of encouragement meant in our lives, and to let them know how much they mattered.

In Luke 17:17, Jesus asks, when only one man returns to thank him after he healed ten lepers, “Were not all ten cleansed? Where are the other nine?”

Wouldn’t the world be a better place if all of us could learn to say, “Thank You” and give our mentors the praise they deserve?

2 Replies to “Respecting My Writing Roots”