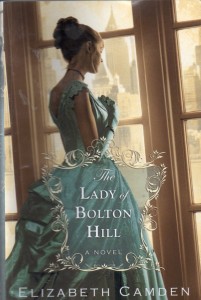 Discovering new authors is one thing in which I delight, so when my writing colleague and four-time author, Karen Barnett, suggested Elizabeth Camden, I ordered her newest tale, The Lady of Bolton Hill.

Set in Baltimore in the late 1800’s, journalist Clara Endicott, a champion of the poorest children in England, has escaped a prison sentence and returned to her native America.

Once home, she is thrust back into high society writing for her father’s publications and becomes reacquainted with her childhood friend, Daniel Tremain. The man was once an impoverished lad himself, but because of his strong work ethic and cleverness, has risen prominently among the city’s elite. Clara soon discovers Daniel is driven by a deep-seated grudge against someone who wronged his family early in his youth and has created his own enemies seeking revenge.

Daniel’s attraction to Clara makes her a target. How she manages her affection for Daniel, her commitment to writing the truth, and her deep love for those who don’t know her Savior makes an intriguing and intertwining tale. I was held captive from the moment I opened the book and have already ordered a second story.

If you like intrigue, historical stories, blended with the promise of love, don’t miss this novel.

I will be recommending other works as the year progresses, both historical and contemporary writers. Watch for future installments.