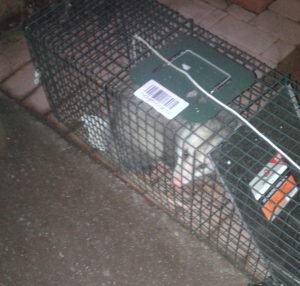 This tale started with a stray cat and a man who can’t abide any animal going hungry.

When a ragged old tom looking like a cross between a barn owl and a raccoon appeared on our doorstep, my husband’s answer to the cat’s problems was feed it. Which means the cat stuck around for more. More. And more.

He had been wounded, his skin was torn near the ear. The blood attracted flies. He needed help.

But the animal had trust issues. We couldn’t get close. Getting him to a vet would be impossible.

My husband bought a trap—one of those with a steel spring in the door. Except this model closed like a bridge over a river where ships had to pass. Slow. Steady. Any self-respecting cat would be embarrassed getting caught in that thing.

But we did catch a possum.

She curled up in the corner doing what she did best—playing dead. I looked at my husband. “Where should we take her?”

“Down by the park.” The area was part of a wildlife refuge—near a river and full of underbrush. Perfect for a possum. “And far enough away so her GPS doesn’t work.”

My husband left—possum in the back.

He returned an hour later. “Couldn’t find a good place to turn her loose.”

“How about that area under the bridge?”

He left again. Returned again. “Not suitable.” He looked defeated. “Would you go with me?”

“Is the possum okay?” I climbed in. The possum looked up, her solemn eyes staring as if she were thinking, “Oh no, not again.” I felt sorry for her. “You don’t suppose she’s car sick?”

We tried another remote area. Nothing seemed suitable. We returned home.

“I’ll call Fish and Wildlife. See what they recommend.”

Several minutes later he found me. “It’s against the law to trap and release possums.”

“Seriously? So what do we do?”

“But she’ll just come back to the trap.”

“After an afternoon of riding in a car, I doubt she’ll return here any time soon.”

So after dark he carried the trap to the far edge of our property and aimed the door at the neighbors. The possum hurried away as if she’d been hit by lightning. We haven’t seen her since.

But we still have a cat to catch.