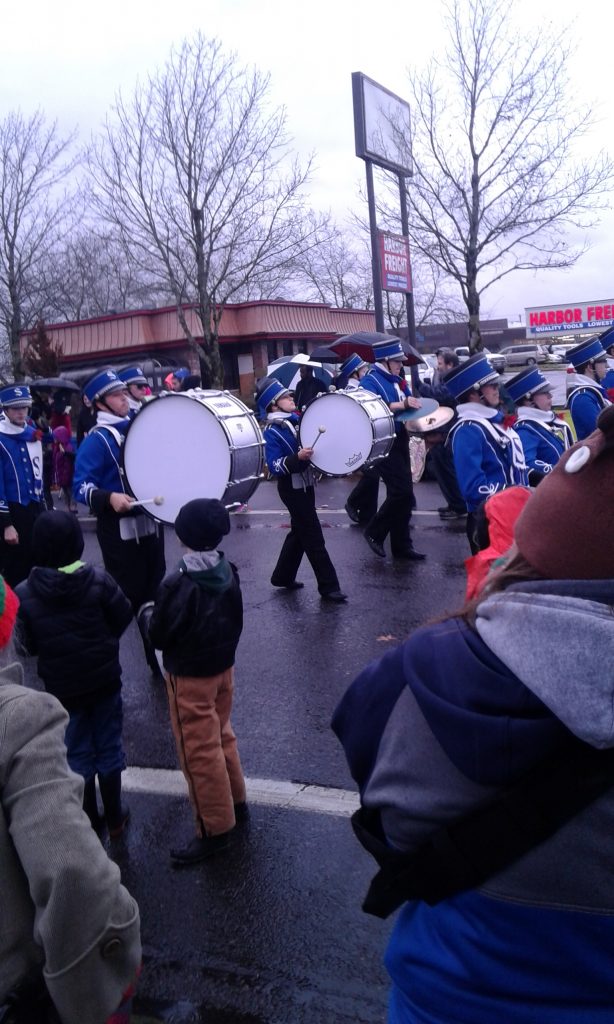 Dubbed the oldest and coldest, Springfield Oregon’s Christmas parade, a tradition for more than six decades, almost didn’t happen this year. The event’s coordinator announced mid-October that lack of funds and volunteers forced the cancellation of the annual exhibition.

The outcry from the public didn’t fall on deaf ears. Two brave souls came forward to resurrect the parade and help it celebrate its 65th year, calling the effort “A Christmas Miracle”. Volunteers worked tirelessly to get the parade back on its feet.

On December 2, more than a hundred floats, marching bands, horse drill teams, and the local tractor club filled the streets with holiday cheer. Rain poured down, umbrellas and summer gazebos went up and the crowd swelled the sidewalks with numbers of spectators many estimated were larger than previous years. The first miracle came true.

For one young man a second miracle was about to happen.

Reilly Gault, 15, was born with albinism, an inherited genetic condition that reduces the amount of melanin pigment formed in the skin, hair, and eyes. As if that wasn’t enough, he also has optic nerve hypoplasia, a condition that prevented the back of the retina and optic nerve from becoming fully developed. The teen could only see things when they were extremely close. Whiteboards in class, the smile of a friend, and the words of a textbook are all things he couldn’t see. Technology and his iPad allowed him to take magnified photos.

A couple of months ago, Gault discovered special glasses, called eSight, on the internet that would change all that. He showed his parents, but the cost, $9,995, was prohibitive. Through a special fundraising program provided by the Canada-based company, the family decided to try raising the money for the glasses. The Springfield community responded and two days before the parade Reilly received his glasses.

On Saturday, December 2, he was finally able to march with his school band, play his drums, and follow the conductor—the fulfillment of a lifelong dream. I’ve known Reilly since he was a six-year-old member in a Bible club for which I was a leader. He is a talented musician, playing not only the drums, but the cello, the marimba, and the keyboard. He is one of my personal heroes. Way to go, Reilly. God’s blessings on your future life.

May the miracle of Christmas fill your home this year as well.