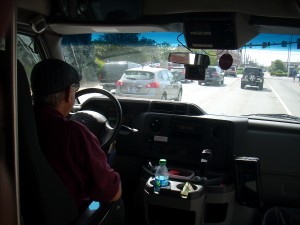 “Your flight has been cancelled.”

After waiting twenty minutes for my plane to be cleared for takeoff from Eugene, Oregon on the first leg of my journey to Indianapolis, Indiana, the ticket agent’s words numbed me. Images of wasted dollars filled my mind. The American Christian Fictions Writers conference, paid in full, and a hotel reservation with too few hours left to cancel, waited at the other end. What would I do?

I had called a friend a few minutes before, asking her to pray for a timely departure. I had connections to make. Now I wouldn’t fly at all.

Heartsick, I approached the ticket agent to ask about options. He said he could fly me out the next morning, arriving later that afternoon, which meant missing an entire day of a three-day conference. Or I could take a chance and fly to Portland, Oregon trying to get a standby seat on a jumbo jet bound for Chicago that night.  The plane was big, but full, he said. Sometimes a seat remained empty.

Phoning my husband, I asked his wisdom. He said to go for it. I told the ticket agent, “You only live once. Book me.”

I arrived at the gate of the Chicago-bound plane with ten people listed on stand-by.  When the schematics of the plane flashed up on the monitor, only six empty seats remained. Not good odds. I kept praying. With each ding of a boarding pass, my hopes dwindled, as did the number of available spots. Six, Five, Four, Three. . . It looked to be a long night in the Portland airport.

When everyone had boarded, I heard my name. I jumped up and approached the gate desk. With a smile, the attendant handed me a boarding pass for the last of the two remaining seats. I told the woman I was so happy I could hug her. Singing thanks to God, I boarded.

The irony hit me the next morning. With the original flight plan I was to arrive at 10:30 a.m. in Indianapolis. Flying on God’s timetable, I arrived a full hour earlier.

Is He great or what?

I could feel Him smiling.