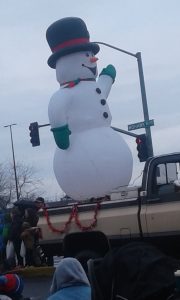 The weatherman predicted a downpour here today for the 67th Springfield Oregon Christmas Parade, an event that boasts it is the oldest and coldest parade in the nation. But despite the warning, people flocked to the curbs along the streets and endured a mild drizzle for about a half hour before the rain gave it up. I guess the precipitation wanted to enjoy the festivities, too.

Hometown parades are interesting. The audience never knows what to expect from year to year. A year ago the local tractor club motored by. This year three equestrian teams trotted along the pavement leaving their signature calling cards in several places. Lots of steaming wheelbarrows rolled by. 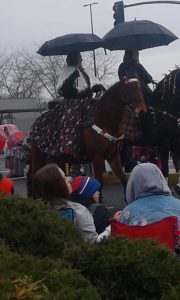 The two high schools competed with each other by sending their marching bands and dance teams. The drums were loud, the instruments squeaky, and the semblance of a Christmas tune almost recognizable. Not bad for high schoolers. 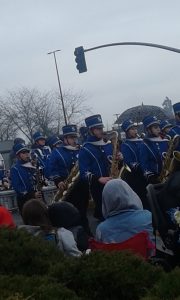 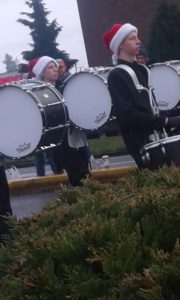 The floats, pulled by company trucks displaying their logos (advertising at its best), varied from those centered on the Christmas season and the birth of the Christ child in Bethlehem and those who played up the theme of “Let it Snow!” 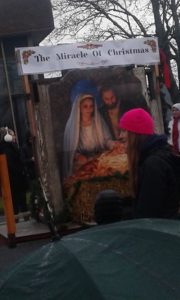 The Grinch came in a variety of depictions along with Santa himself. Marines walked along the Toys for Tots truck, receiving the toys people brought to donate for children less fortunate. 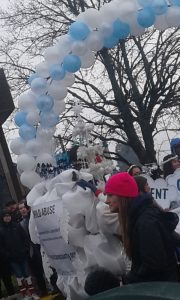 Wrapped candy flew from vehicle windows to children with outstretched hands. Leaflets inviting people to worship at local churches as well as businesses selling products and services were distributed float by float, company by company.

I marvel that this long standing tradition still happens the first Saturday of December. I can remember my parents hustling my siblings and me to the parade many years ago. Not much has changed. The drums were loud then, too.

2 Replies to “Oldest, Coldest and Wet”