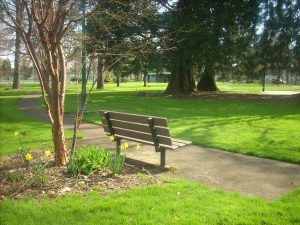 Watching the news this week as reporters hashed and re-hashed the recent presidential order to prevent people from terrorist-infested nations entering our country, I was reminded of an incident that happened to me in the early 70’s.

A recent graduate from college, I had landed a job in a downtown office not far from a popular public park. To get away from the feel of four walls and canned air, I decided to spend my lunch hour on a warm bench.

I hadn’t been there long when an olive-skinned young man with dark eyes and unruly hair came and stood near me. In those days, terrorist was not a word we knew. As a college grad, I’d spent many classroom hours alongside peoples of other nations and skin colors. We all shared the same goal—get through school.

I said hello. He returned the greeting and launched into halting English, telling me his family was in Iran, he was here alone, and could we be friends and meet sometimes?   I was startled.  He hadn’t asked my name, nor had he given me his. But his phrase certainly sounded like a pickup line.

I was mindful of the verse in Hebrew 13:2 that says: “Do not neglect to show hospitality to strangers, for by doing so some people have entertained angels without knowing it.” By the same token he didn’t fit the profile of Emma Lazarus’ poem, “Give me your tired, your poor, your huddling masses yearning to breathe free.” He knew what he wanted to say and do.

I proceeded to keep the conversation going, trying to answer his questions, and trying to make him understand I was only on a lunch hour. When it came time for me to leave, I wished him well and we parted amiably.

A few days later I headed for the park. No sooner had I sat down than he appeared. Surprised, I asked him how his week had been. He responded with pretty much the same conversation we’d had before. His request for us to be friends grew more insistent. I told him I was a Christian and my belief in Jesus Christ was basic to who I was. Any friendship we’d have would be limited by our different views. The relationship he was pushing for couldn’t happen. He didn’t seem happy.

At the advice of a trusted friend, I didn’t visit the park for several weeks. Something about this encounter left me uneasy. The young man was a little too insistent. I’d known others sweet-talked down a trail they didn’t intend to go.

Later that summer I returned to the park, no sign of my suitor in sight. Relieved, I ate my lunch in quiet reflection. Could I have done more? Made a difference? I’ll never know. I’d offered  a man who seemed lost the gift of friendship. It was all I had to give.