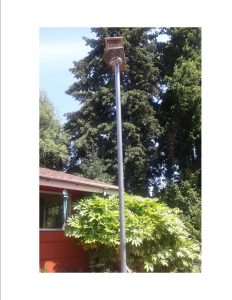 I called him Mischief.

He deserved the moniker. All he’d done since he first invaded our patio late last spring was spread mischief.

He is a squirrel.

We’d first encountered his antics when the squirrel-proof bird feeder tempted him and instead of stealing seed from the seed tray, he popped the top off and climbed inside. I posted that saga last fall.  https://authorpatricialee.net/thwarting-determination/

But the story continued. . .

My husband added a screw to the top and hung the feeder in a different place. No walls to climb, no ledges to jump from. The birds could eat in peace.

Hubs moved feeder to another wall. Mischief tried to maneuver the screen door on the back of the garage and walk along the casing, but he couldn’t make the feeder.

Mischief shifted his attention to the suet feeder. This was a small 4 x 4” hanging structure with wire sides that accommodated the birds when they roosted and fed. We watched the rascal sit on the border wall of our patio and mentally calculate the jump to the suet.

He was amazing.He scoped out that suet feeder from different angles. He moved into the lilac tree and climbed branch by branch to the edge.

Finally he jumped. And landed. I caught him hanging from the suet by his front feet, his tail and hind feet dangling as he chomped away at the suet. We shouted and he raced to the ground, landing on the table as he hurried.

My husband resurrected a 10 foot chain link fence pole from the back yard and stuck it in the space on the patio table reserved for our umbrella. He attached the suet feeder at the top. The birds loved flying in and dining ten feet in the air. The squirrel sat on the fence and watched.

He’d sneak in and clean up whatever suet the birds dropped and often climbed on the table looking for more. I’d catch him eyeing the pole like he thought he might try. But he didn’t.

Last week I glanced out the window and found Mischief sitting on the suet feeder, ten feet in the air, feasting on the simple fare. I tapped on the window. He ignored me. My son went to the patio door.

Finally a shout got his attention and he scurried down the pole like a fireman on his way to an emergency.

We waited. He’d be back. We’d discover how he got up there. Mischief didn’t disappoint. Within minutes he was back on the table and with us watching, our mouths open in shock, he wrapped himself around that pole and shimmied up like it had toe holds. Took him all of three seconds.

Baffled, my husband probed for answers. He thought about a circular disk midway on the pole to block the squirrel’s advance. That would be difficult to install. He opted for a second idea. Grease the pole. We’d heard others had tried that.

The next morning Mischief appeared on schedule. We weren’t sure how long he’d been there before we spotted him, and couldn’t be sure if he’d already tried climbing the pole, but he sat on the fence like a statue of Buddha, round and squatty, and looked at the pole. And looked. Looked again.

He didn’t try to climb. Perhaps he already had. And failed.

Anyway, he’s left the feeder alone for two days. Did we win?