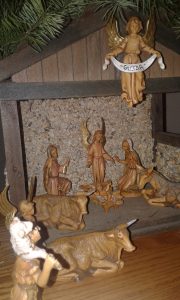 I first heard the Christmas song, Mary, Did You Know?, when my infant son was six months old. I was moved by the words of the songwriter when he asked “When you kissed your little baby, you kissed the face of God?”

Like all new mothers I remembered the overwhelming awe of staring into the face of my newborn and wondering what this tiny being would become. Here he was, so innocent, so helpless, yet so full of himself. He’d come programmed, as if the first nine months of his life in the womb had simply been a formatting of his computer. He arrived fully functional, his tiny brain readied to log on and begin recording. I wept at all he could become; at the responsibility I had been given.

At three days old a neighbor brought him a bunny that played music. His little head turned toward the sound, trying to figure out what was making the music. At six months, he was very aware of everyone and everything in his line of focus. A friend observed, “He’s very with it for a baby of six months.” What else could I do? I beamed.

But Mary’s first days with her son must have been filled with fearsome responsibility.  She knew her son was the son of God.  She’d been told he would save his people from their sins.  Living as a Jewess in a country occupied by Rome, she must have felt misgivings when first the shepherds, and later the wise men, addressed her baby as the newborn king.

What tug did she feel on her heart strings as she watched her toddler grow into a little boy?  What anguish ran through her veins when she discovered the twelve-year-old Jesus discussing the scriptures with the men in the temple? And what pain rocked her when he was charged with blasphemy and led away to face those same men later–the very men who would turn him over to Pilate for scourging and execution?

Mothers bring hope to the world when they bear children.  Each child has the potential to change its surroundings—to invent a new machine, discover a cure for cancer, or bring peace to a world bent on its own destruction. None of us, though, can know what path our child will follow as we rock his or her cradle. We read books, seek professional help, and pray that this little one God has loaned us for a time will find his path, his niche, his intended calling.

But Mary was given more information. The Bible says she pondered those things in her heart.  Did she weep over Jesus as I wept over my tiny child?  Did she rock Him with a light touch, knowing He would be ripped from her in the end? Did her prayers beg God for a different path for Jesus? Or did she accept with quiet resignation the blessing bestowed upon her as God’s chosen one to bear His son?

The Bible doesn’t tell us much about this young mother. She appears in the stable, in the synagogue, and at the base of the cross.  We know Jesus loved her because as He was dying He cared enough to give her to John as his mother and He gave John to her as her son. But I’m convinced that Mary did know, and in knowing wept over her tiny infant. He was her baby, even though He would grow up to save her and her world.

So Mary, did you know?

Yes, you did. And you obeyed God’s request anyway.  Hallelujah.

Reposted from an earlier blog–2010