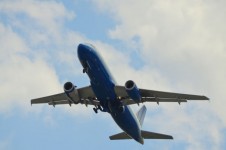 On my return trip from St. Louis in September, I witnessed an incident aboard my flight which disturbed not only me, but several passengers around me.

A woman boarded the plane with a box in her hands and sat one seat ahead of me. She made a great show of stowing the box, getting situated for the trip. Not long afterward, the gate controller boarded the plane and approached.

The controller explained she’d learned the woman had brought a dog aboard and there was no mention of an animal either on the flight itinerary or on the woman’s boarding pass. Unless she could present documentation that the dog was a service animal or an emotional companion, the woman needed to buy the dog a ticket and transport him through proper channels.

The passenger flew into a rage, accusing the controller of singling her out. She shouted to everyone that she had flown all over the country and never been challenged. She threatened to report the controller to her superiors and demanded to know her first and last name. The controller remained calm and again requested documentation for the animal. The woman resisted, but in a show of righteous indignation, she grabbed her bag from the rack and produced a piece of paper. The controller looked dubious about its authenticity, but allowed the woman to remain on the airplane.

Those of us who rode behind the passenger shared quiet smiles as the plane prepared to fly. I’d been holding my breath so long I’d developed a tickle and coughed to clear my throat. The passenger whirled around in her seat and glared at me, a threat in her eyes. I stared back, but kept my thoughts private even as I prayed for all involved.

Throughout the rest of the flight, the passenger continued to harass the attendants, reminding them how badly she’d been treated and how she would make sure the controller was reported to the airlines when she landed. Even as she disembarked, she made threats, adding demeaning name-calling to her vocabulary.

Once home, I e-mailed the airline’s customer service to report the incident. I praised both the controller and the flight attendants for their continued calm in the face of this rude and threatening passenger. I also expressed my discomfort at having to travel with such an agitated person and felt she should be tagged, lest she disrupt future flights.

Today I received a  phone call from the airline thanking me for contacting them. The customer service agent told me that all incidents are recorded by the flight staff, but when passengers corroborate the story, their eyewitness account gives the airline muscle.

That e-mail took only five minutes of my time. But by doing what I considered my civic duty, I may have prevented a more serious incident in the future. Imagine what we could all do if we acted on the injustices we see. This degenerating world might become a better place. Luke 6:31

Nobody can do everything, but everyone can do something. ~Author Unknown

One Reply to “Making A Difference”