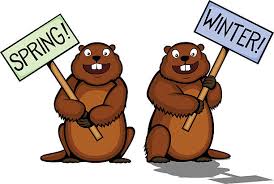 Will he or won’t he?

February is here and with it arrives the much anticipated prediction of Punxsutawney Phil, the official mascot for Ground Hog Day, February 2.

The tradition originated from an ancient European Christian observance of what was known as Candlemas Day. That celebration represented the midpoint between the winter and spring equinoxes. Candles which had been used during the winter were blessed by religious leaders and passed out to the townspeople every February 2.

Whatever the weather was on that day determined whether the rest of the winter would be cold and rough or spring like.

The Germans adopted the custom replacing the candles with hedgehogs. When those peoples emigrated to America, they brought the tradition with them, substituting the ground hog, which was what they had. The celebration was declared an official observance by the local paper, The Punxsutawney Spirit, in 1886 and gained national acceptance not long afterward. Ground Hog Day was born.

Unfortunately Punxy has a little competition this year. The 54th Super Bowl between the Kansas City Chiefs and the San Francisco Giants kicks off mid-afternoon. At the same time a couple I know are tying the knot.

I can just see his whiskers trembling, his little paws shaking, as he emerges from his hideaway anticipating the flash of cameras and the cheers of crowds. He looks around and find no one. He’s been abandoned for a pig skin being thrown in an overpriced stadium filled with screaming fans miles away.

The National Oceanic and Atmospheric Administration says Punxsutawney Phil has been right almost forty percent of the time in the last ten years. So when you stop cheering for your team and wonder if your throat is sore from yelling or if the weather is staking a claim, check in with Punxsutawney Phil and he’ll tell you what to expect.

He’ll make his prediction, whether or not you are present.