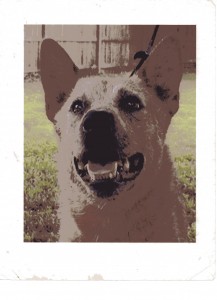 On a hot fourth of July several years ago, a distraught dog wandered down our street looking for cover. We didn’t recognize the animal, but understood  how the booms, blasts and sizzles had frightened him enough to break his lease, hop the fence, and find us. Not thinking, my husband let the animal into the garage.

My curious, young daughter discovered him and the next thing we knew she was screaming, arm bleeding, while the dog cowered in the corner.  A trip to urgent care left her with stitches, a tetanus shot, and a permanent fear of dogs.

Skip ahead ten years. My art-loving daughter needed a tutor and found a local artist who gave lessons in her studio. Our first day we were introduced to a spice-colored Australian cattle dog named Nutmeg sitting primly beside her master, exuberant tail wagging, her happiness to see us wiggling out of every muscle.

At my daughter’s hesitance, I mentioned  her fear of dogs to the teacher. We learned Nutmeg was the official queen of the studio, greeting visitors, alerting us to the passing of the postman, and keeping watch on the neighborhood dogs out walking their masters. I held my breath.

The dog, though, studied my daughter with those warm, brown eyes of hers, keeping her distance, but maintaining her presence. When my daughter needed to work on animal eyes, Nutmeg offered hers for inspection. When fur became the issue, Nutmeg patiently stood by while the teacher and my daughter examined hers.

Nutmeg became the on site model for all things canine—an ears, nose, and throat specialist. When not needed, the dog slept quietly at my daughter’s feet, occasionally offering a chew toy for a quick toss across the room. With each interaction, my daughter’s fear slipped into the past.

This week Nutmeg died. She’d developed an intestinal condition over the summer which led to the diagnosis of cancer.  Her owner, my daughter’s teacher, could barely contain her grief while she and my daughter drew German Shepherds at their weekly lesson.  Romans 12:15 says: “Rejoice with those who rejoice, mourn with those who mourn.” Had I known of the dog’s death, I would have insisted on a different subject for this week’s lesson.

Nutmeg will be missed, perhaps by my daughter most of all. The dog’s gentle nature and unreserved love worked to restore the trust my daughter lost in an unfortunate childhood incident.  No human could have done it better.

2 Replies to “In Tribute– To Woman’s Best Friend”