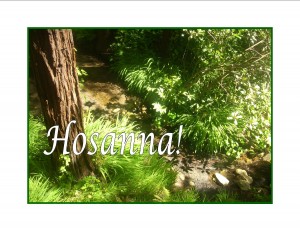 For me, the event of Palm Sunday is a sobering one. I imagine Jesus at the top of the Mount of Olives near Beth Phage looking down at Jerusalem, knowing that entering the city will be His final act. He won’t leave alive.

God sent Him to earth for a reason. To fulfill his destiny he is compelled to go.

Yet in his humanity, he had to feel some apprehension. He’d lived on this earth thirty-three years, walked among his fellow men as a friend and neighbor, as a teacher taught the masses about God’s kingdom. Now he would perform the ultimate sacrifice— the giving of himself as the sacrificial lamb for all mankind. Those who loved him wouldn’t understand the gift. Those who hated him would believe they’d won.

Entering Jerusalem would set into motion the most miraculous triumph the world had ever known. Because He loves us, God sent His only Son into the world as the atonement for the sins of all mankind.

It’s hard to comprehend that kind of love. Or the impact it would have on lives centuries later.

In Zechariah 9:9, the prophet had prophesied centuries before: “Say to Daughter Zion, See, your king comes to you, gentle and riding on a donkey, and on a colt, the foal of a donkey.”

Jesus fulfilled scripture as he rode into Jerusalem, the people meeting him common citizens. All they had were the clothes on their backs and the palm tree fronds around them. They lined the streets, spreading their garments and the greenery over the roadway. They waved the palm branches as He passed. “Hosanna to the Son of David,” they shouted. “Blessed is he who comes in the name of the Lord.” They recognized him for who he was—the chosen Son of God.

This Palm Sunday, April 10, may we pause and remember that day, that triumphal ride, that proclamation by the people.

Hosanna! Blessed is he who came in the name of the Lord.