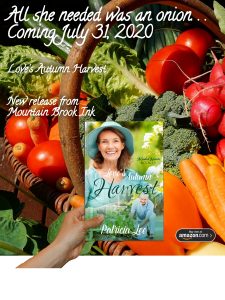 When my husband and I moved into our second home in 1992, we landed across the street from a retired couple who enjoyed gardening. The man had grown up on an Oklahoma farm during the Depression.

He said his family never had money, but they always had food because they grew it.

The neighbor’s garden was a wonder of nature. He grew tomatoes by the bucketful, boxes of corn on the cob, as well as bountiful amounts of zucchini, summer squash, onions, peppers, beans, and cabbage.

He had more produce than anyone on the street could use.

Because he knew I canned vegetables every summer, my family of four was gifted with all the extras. We had so much extra we packed it into the trunk of our car and secretly transported it to the local soup kitchen and local food bank.

They couldn’t get produce this fresh from their regular sources so the kitchen staff was always glad to see us coming.

In my upcoming release of the fourth book in the Mended Hearts series,  Love’s Autumn Harvest, the male protagonist is also a gardener. Widowed before he turned fifty, he’s retired from his professional job as a high school principal. To fill his time he enjoys growing vegetables to share with the local food bank and the Civic club of which he is a member.

Like my neighbor he has more than he can use, give away, or display at the fair.

He’s also an attractive target for single women with relationships on their minds.  An attraction he doesn’t share. The plot thickens when a starry-eyed divorcée stakes her claim on him and befriends his across-the-fence neighbor, using her kitchen window as a lookout. From there, the story proceeds.

I hope the story makes  you laugh.

Never know what will come from having a green thumb.