Reposted from an earlier entry February 2015–

Today, while waiting at an intersection near the university where I live, I studied the faces of the people in the crosswalk. A handful jogged by on their way to the popular running path our city boasts. Others were students, backpacks in place, hurrying to their next class.

One young man stood out from the crowd. Hair in need of a cut and baggy jeans clinging to his hips, he crossed the street on his skateboard. In his teeth he carried a long-stemmed, red rose. The red bloom dangled from its stem, jiggling with each push of his foot on the pavement. I wondered if the person for whom the rose was intended would fully appreciate the gesture when he arrived. I doubted there would be much of the flower left. But then, maybe he’s one of those alone on this day and the flower was for him.

Expressions of love will be shared by many this Valentine’s day—dinners out, flowers, candy, and sentimental cards. Those with significant others in their lives will no doubt revel in the knowledge that they are special to someone.

But there are those who, through no fault of their own, despise the annual event. For whatever reason, they are alone. Some never found a person with whom they could share their life. For others, illness has isolated them. For some, death has taken their loved one, or divorce has destroyed their family. The day may seem endless to these forgotten souls—they can’t wait for it to end.

In my upcoming novel, Love Calls Her Home, which will be available in paperback in less than two weeks, the heroine and the hero have been distanced by their military careers. Both have come home changed by the circumstances in which they served, each with unanswered questions about the other, and with hurting hearts from lack of interaction with the person with whom they were once in love. Finding their way back to love will take time—if they can find love at all.

Jesus came to be a friend to the homeless, a companion to the needy, a comfort to those who mourn. His short time on earth testified to the love of an eternal Father who understood the kinds of pain and loneliness life here can bring.

In John 14:1-3 (NKJV) Jesus said, “Let not your heart be troubled: you believe in God, believe also in me. In my Father’s house are many mansions: if it were not so, I would have told you. I go to prepare a place for you. And if I go and prepare a place for you, I will come again, and receive you unto myself, that where I am, there ye may be also.”

Whatever your state this Valentine’s Day I wish you the joys of God’s love. While others here may have failed you, He never will. 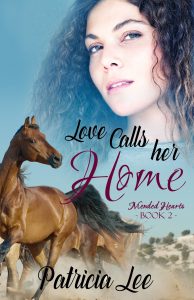 Looking for a good read to fill your hours this spring? Here is what Melanie Bates wrote about Love Calls Her Home, giving the story four stars out of a possible four and a half:

“The second novel in Lee’s Mended Hearts series is a sweet, modern-day love story between two vulnerable people facing intense personal struggles. With a solid plot, complete with genuine characters and strong conflict, Lee brings a tender story that will touch readers’ hearts. Along with the intense romantic connection between Lissa and Kurt, the highlight of this story is the adorable, wounded little boy along with an equally wounded young horse who are both in need of healing. Though it takes a while to get to the heart of the story, once readers reach that point, they will not be able to put the book down.

When former Navy officer Lissa Frye meets the old love who broke her heart, Marine Kurt McKintrick, after not seeing him for two years, it is an awkward reunion. Both are back in the same Oregon town, Lissa starting anew as a sheriff’s deputy and Kurt fulfilling a promise to his best friend and dead fellow Marine, Foster Blake. He is working with Foster’s mother at her animal rescue center, tending horses. Kurt knows he hurt Lissa and he wants to explain the reason why, but the tension between them is thick. However, time spent together at the animal rescue center because of a wounded boy begins to thaw the chill between Lissa and Kurt. Suddenly, their love is rekindled. But will their personal fears derail the opportunity of a second-chance romance and a happy future?”