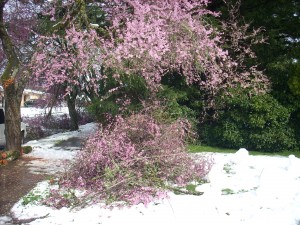 Snow is expected to fall in the Cascades this weekend. Forecasters predict the accumulation will be light, but any precipitation will be welcome since the white stuff is almost non-existent in the nearby mountain ranges.

But on the first day of Spring? Seriously?

Oregon is known for strange weather patterns, this winter no exception. Little rain has fallen the past few months, spring flowers are already finishing up their blooming seasons, and above normal temperatures have lulled people into thinking they’ve drifted south somewhere in their dreams. Considering more than half of the United States has received above normal amounts of snow and ice in recent months, breaking records with their storms, Oregon’s lack of precipitation has locals shaking their heads, wondering what is going on.

When we first married, my husband and I visited Crater Lake National Park in mid-July. Around much of the crater’s rim, six-foot accumulations of packed snow lined the roads and blocked the hiking trails. The park ranger who led our tour said Crater Lake had two seasons—winter and August. Considering snowpack at the resort this year is reported to be twenty-eight inches—the lowest recorded snow level in years—Crater Lake may see a regular spring and summer as fears of drought plague the state.

In Psalm 147:15-18, while praising the Lord the psalmist writes,  “He (the Lord) sends out His command to the earth, His word runs very swiftly. He gives snow like wool; He scatters the frost like ashes; He casts out His hail like morsels. Who can stand before His cold? He sends out His word and melts them; He causes His wind to blow, and the waters flow.”

Though I don’t pretend to understand why these events have occurred, I have to believe God has a reason for the freak weather patterns. So while I work outside in sleeveless tanks in the middle of March instead of May, preparing my July flowers to bloom in June, I’ll rest in the knowledge that the God of the heavens has everything under His control. Maybe He’ll hit us with a blizzard the end of March. Don’t laugh—it has happened before. The above picture was taken the first day of spring in 2012.