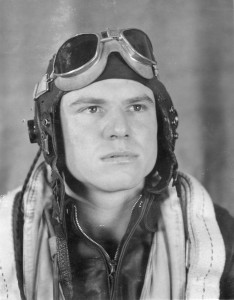 Our neighbor in flight gear–1943

Everyone needs a neighbor like Lenvil: a silent hero, a steadfast friend, and a man with a great heart.

The eldest son of an Oklahoman farmer, Lenvil quit school after the sixth grade when his father  needed him to work the fields. When WWII broke out, he enlisted in the Army Air Forces, receiving his radio and gunnery training before being awarded his wings.

What made the extra flights unusual was that the missions were not ordered, but volunteered.  One of the team members had become ill and was forced to remain behind while his flight crew finished their tour of duty.  When Lenvil and his buddies learned the sick crew member would have to fly with a new group to complete his tour, the flight crew offered to fly three additional missions for him. Each of the members of the group received a special commendation for their willingness to put their lives in danger three more times.

President Roosevelt cited this group for the historic bombing of the Muhlembau aircraft assembly plant at Brunswick, Germany as well as participating in the Third Air Division England to Africa shuttle bombing of Messerschmitt aircraft assembly plants at Regensburg. My neighbor was awarded the Air Medal and two Oak Leaf Clusters. A humble man, Lenvil kept his military honors to himself, stashed away in a vintage shoe box. Only a framed document acknowledging his service hung on the wall, a gift from his proud mother.

When he returned home Lenvil married the girl he’d left behind  in Paris, Texas. Jobs there were scarce so the couple moved to Oregon where the timber industry boomed. Married sixty-three years before his wife passed away in 2009, Lenvil has  lived across the street for the better part of fifty years.  My husband knew  him long before he met me, before we purchased our home.

A retired foreman in a plywood mill, my neighbor  poured himself into growing a garden every summer, one big enough to feed the entire block. My family benefitted from his labor of love—buckets of tomatoes, cucumbers, zucchini, and corn arriving on an almost daily basis at the height of the season. This year he decided not to grow vegetables.

His ninetieth birthday is Sunday.

So we say thanks and Happy Birthday to a man who has lived the life of an unsung hero, serving his fellow man and his country—making life better for those around him.  It’s our turn to salute you—Lenvil—and call you good neighbor and great friend.

One Reply to “Happy 90th Birthday to an Unsung WWII Hero”