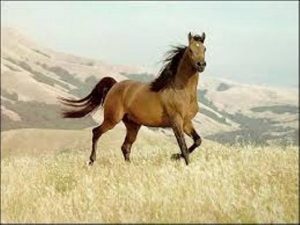 This week Facebook sent me a memory from five years ago that I had forgotten. The picture was one I’d obtained with permission from the Bureau of Land Management. It featured a lone stallion standing on a grassy knoll looking out at the camera. His caramel color, long black mane and tail, and the spidery shading on his lower legs marked him as one of the Kiger mustangs living in the Steens Mountain in eastern Oregon.

He sparked my imagination and from that picture I wrote a novel, Love Calls Her Home, that included mention of this small band of horses. I found a video produced by the Oregon Public Broadcasting team which showed the herd in action. Protected by the government as the last of their kind, knowledge of the herd was new to me even though I’d spent my entire life in Oregon. To discover they had originally arrived on American soil with Coronado and his Spaniards here to search for gold, came as a surprise.

I’ve always loved horses. They represent a slice of history that is fast becoming legend. My intermediate years, from middle school through high school, included caring for my horse, Sammy Jo, as well as showing him in 4-H fairs several consecutive summers. He provided hours of relaxation and entertainment, allowing me to roam the hills beyond my home alone with my thoughts discovering a God who loved me—thoughts that would later prove the stuff of my imagination to fill novels. Time well spent.

Psalm 121:1 (KJV) “I will lift up mine eyes unto the hills, from whence cometh my help. My help cometh from the Lord, which made heaven and earth.”

If you haven’t discovered my stories:

An Anchor On Her Heart—the story of a young wife who wishes her husband would come home and stay. 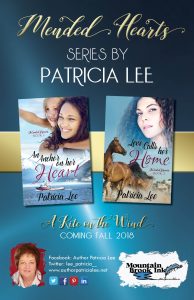 Love Calls Her Home—the story of a boy with a difficult family situation who acts as the catalyst to reunited two lonely people estranged by distance and military careers.