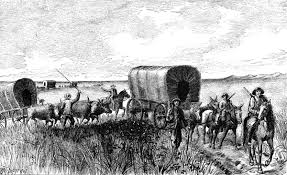 The second book of the Call of the Frontier series will be available July 1, 2021. It  follows the story of my great–great grandfather, Cornelius Joel Hills, as he captained the Hills wagon train of 1851.

He had crossed the prairies once on horseback and traveled to the Willamette Valley in Oregon to lay claim to a 640-acres parcel of the free land the government offered to encourage emigration to the West.

This second journey, though, he brought with him his new bride, her immediate family, and three of his brothers.

Though my great-great-grandmother had grown up in the aftermath of the Black Hawk War on lands that would become the new state of Iowa after 1833, she must have had many misgivings joining her new husband in the Oregon wilderness.

One decision to be made would be the kind of conveyance they’d need to travel. Conestoga wagons, built in Pennsylvania by German craftsmen, were designed to haul cargo. Manufacturers and tradesmen preferred the curved ends of these vessels, which made them look like a boat on wheels. Shipments of goods couldn’t move around or fall out either end. Sail cloth was used to cover the freight, protecting it from dirt, dust and the changes in weather.

No front seat existed. The driver had to ride the left rear horse using a “jerk line” that connected to the left front animal or he had to walk.

The prairie schooner, of which there are many varieties, became the preferred transportation of those on the Oregon Trail. The beds were flat-bottomed and shallow, with squared ends. They did provide a driver’s seat which allowed the teams to be controlled by a set of reins from the front. Instead of the tight cloth covering of the Conestoga, the schooner wagon traveled beneath a canopy of ribbed arches stretched with cloth which often billowed in the wind. As the pioneers crossed the plains, the white tops looked like the sails of a ship, dubbing the  craft “Prairie Schooner”.

Author’s Note: The book will be available in eBook format for .99 beginning June 1, 2021. Watch for the cover reveal coming then.