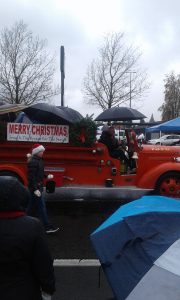 The rain started falling last night, tapered off this morning, and returned to drizzle around noon. The community held its collective breath—would the annual Springfield Oregon Christmas parade be ruined? Dubbed the oldest and coldest parade in the nation, the event would celebrate is 66th year of issuing in the Christmas season. The show had to go on.

My family debated their devotion to tradition. The skies were dark, the clouds heavy, and the chance for staying dry slim. Did we want to brave the elements to watch decorated VW vans and endless groups of car clubs wind their way along our city streets? Or cheer on the local tractor club? Gotta love a small town version of the big time.

We opted for a restaurant on the parade route. Should the weather deteriorate further, we could watch the parade from our booth, ordering hot drinks as part of our occupation and keeping the restaurant staff happy..

But the rain withdrew to a whimper and we walked to the street. The crowd amazed us. All these crazy people covered in parkas and holding umbrellas watched and cheered as the floats meandered by. Dogs on leashes sniffed each other, children jumped up and down, candy thrown landed in the puddles. Yet no one seemed to mind. 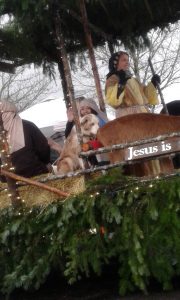 The two high schools sent bands that played Christmas tunes and cheer squads that kept moving to keep warm. Churches sent floats proclaiming the reason for the season. The parade lasted ninety minutes. That’s quite a show for free. But to the audience the event was worth every minute of discomfort they had to endure—heads of wet hair and pairs of jeans soaked to the skin. After all, the parade is a decades old tradition. 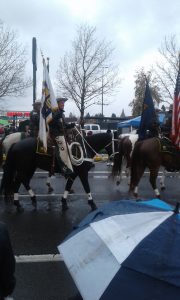 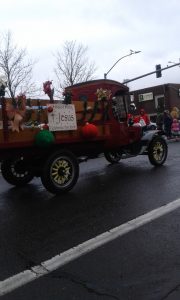 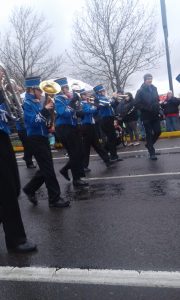 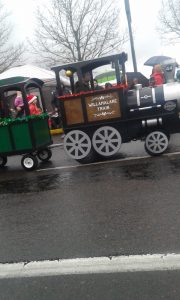 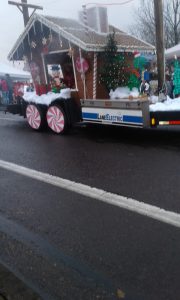 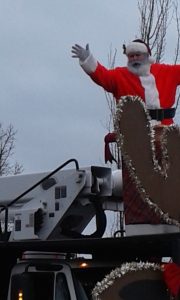