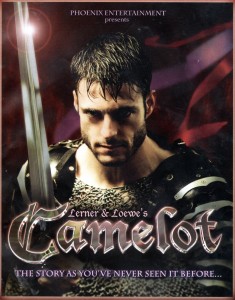 I recently attended a theater production of Camelot, that magical kingdom where rain never falls until after sundown and winter leaves March second on the dot. The perfection of the place is akin to the garden of Eden in the Bible, and the storyline doesn’t stray far from the biblical tale either.

Arthur is the little boy who pulled a sword from a stone and became the rightful king of England. As king, Arthur wants to make might from right, holding high aspirations in the face of problematic realities. He forms the Knights of the Round Table, men who will represent all segments of the country, meeting to discuss problems rather than fight over them. Arthur’s quest is a noble one—make a better society by upholding high standards among his men.

The chink in his armor, much like the temptation of Eve by the serpent in the book of Genesis, is a previous indiscretion in which Arthur was lured into an adulterous relationship. The affair produced a son, Mordred—potential heir and threat—who waits to expose Arthur and bring him down. Just like the serpent lies, convincing Eve to lead Adam into eating the forbidden fruit of the tree of knowledge, so Mordred waits, catching the king’s wife Guenevere and the noble Sir Lancelot in their betrayal. Adam and Eve are kicked out of Paradise. Arthur loses his kingdom.

All of us have at one time or another made a mistake we regret. Depending on its severity, the error can needle our subconscious, disturb our sleep, and haunt our daily life. Being forgiven is what we seek, and like Arthur, we are helpless to change our past. We despair of hope.

When Jesus lived among us, he gave us a way to be forgiven. At his death and resurrection, he commanded his disciples to tell everyone what he had done for mankind. Mark 16:16 (NKJ) “He who believes in me will be forgiven and he who does not believe will be condemned.”

In John 20:31(NKJ) John says, “These (words) are written that you may believe that Jesus is the Christ, the Son of God, and by believing you may have life in His name.”

Think of the hope Arthur would have had, if he had  been able to cling to that promise and been forgiven of the trespass Mordred held over him like a sword. What hope are you seeking today?