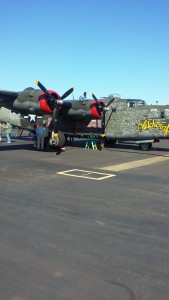 When World War II planes come to our local airport for an exhibition, my husband and son are among the first in line to see them. This week four retired war machines, a B-17, B-25, and a B-26—all bombers— sat on the tarmac in Eugene, Oregon as well as a P-51 Mustang. Tours were available on the bombers and half-hour flights were offered to those who had extra cash sitting in their wallets.

We were familiar with the B-17 because our neighbor, a veteran waist bomber and radio man, flew thirty-three missions on one. His crew was commissioned to fly thirty flights. When one of my neighbor’s crewmen became ill on the twenty-seventh mission, the rest of the team finished their quota of thirty without him. The company of men would receive a medal for their accomplishment, but the crewmember left behind would have to finish out his thirty on another crew. When he returned to duty, his squad volunteered for three more flights to let him finish with them—an almost unprecedented act of bravery—and the group received a special commendation from the Army air force.

As my son and husband toured the planes, they were reminded of our neighbor’s story about a bomb getting hung up in the door while missiles dropped on targets. The pilot told our neighbor to go back and see if he could free the shell. He dutifully climbed down the narrow catwalk, knowing the incendiary device was armed, and using a crowbar, pried the bomb from its trapped position. When my son saw the catwalk, he said it was so narrow they had to put rope protection on either side during the exhibition to keep tourists from falling off and out of the plane. Imagine walking that plank ten thousand feet in the air with nothing between you and the ground but an open bomb bay door.

Each of the planes had their special purpose during the war. The bombers were considered the muscle—all loaded with sufficient artillery to fend for themselves. The Mustang came later to escort formations of bombers, but soon the single seat fighters proved their worth outmaneuvering the Luftwaffe’s larger planes. The P-51 was able to sweep in and clear a path through enemy lines for the heavier bombers, rather than act as sidekick. Their history conjured up an image of a little engine that could. 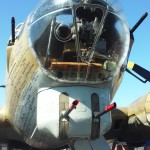 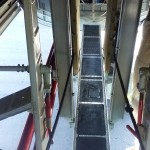 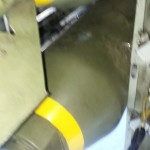 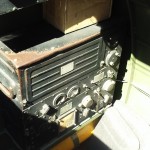 3 Replies to “Boys and Their Bombers”