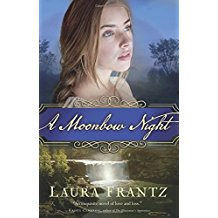 Laura Frantz has earned a place on my favorite authors list because she writes genuine life-changing stories set in the wilderness of early Kentucky. She creates fascinating images of the existence the early settlers endured, the dangers they faced, and the courage they had to summon to survive.

A Moonbow Night, is one of those stories.

Tempe Tucker, a twenty-something woman, helps her mother, Aylee, operate an Inn in the middle of the Kentucke wilderness. In the eyes of the Inn’s visitors, the Tuckers are the remnants of a family who has suffered the loss of its leader, the fathe and refer to Tempe’s mother as Widow Tucker. In truth, Dad is never far, hiding his past and his identity in an effort to avoid any eager bounty hunter.

When Sion Morgan leads his survey party to their Inn, the family members tense, since Morgan has ties to the company searching for the elder Tucker. Sion is intrigued by the independent Tempe, but she has turned her back on any future of love and family. The only man she ever loved died in an Indian attack and no other can compare to him. It’s just as well. Sion battles his own ghosts.

The wilderness wasn’t conquered without a fight and the ensuing story will lead the reader through Indian threats, wild animals, hanging scalps, and revenge killings that are difficult to read, but through which the realism of the time is clearly portrayed. The story is one of hope with the expected thread of romance, one in which time truly does heal all wounds.

I recommend this book to romance readers and to history buffs alike. The book will satisfy both appetites.