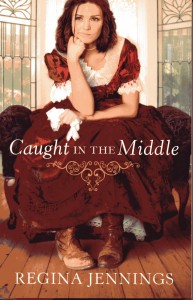 Regina Jennings is a new name in  Christian historical fiction.

I first learned of Jennings when my friend and writing colleague Karen Barnett (author of Mistaken, 2013, Out of the Ruins, 2014 and soon to be released Beyond the Ashes, 2015) spoke highly of a book that Karen had recently read by Jennings.

I’m always on the lookout for new voices so I picked up a copy of Caught in the Middle when I attended the American Christian Fiction Writers conference in St. Louis earlier this fall. My first impression is that Jennings’ works are fun.

In this tale she paired a buffalo hunter with an accountant in an adventure-filled account of life in Garber, Texas. But it’s a story with a twist. The buffalo hunter is Anne Tillerton, a woman with a reputation as a sharpshooter and a past that includes the demise of her husband. The accountant is Nicholas Lovelace, an up and coming businessman looking to better his future.

Anne is only in town to find a runaway cook who flees, leaving the child in Anne’s care. Since Nicholas is the only one in Garber she knows, the two form an unlikely pair who go in search of the missing mother. But mixing with society is not something Anne does well and Nicholas’ future success is dependent upon making a good impression wherever he goes.  As business pressures upon him increase, the duo are caught between  being upstanding citizens and being themselves.

Great fun read. Published by Bethany House Publishers, Caught in the Middle is available from Amazon and CBD.com