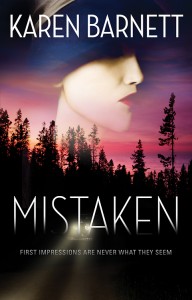 One of the greatest benefits I’ve received as a writer is meeting creative people along the journey. Today’s new author, Karen Barnett, holds a special place in my heart because she is one of my critique partners.

All five members of His Wordsmiths are published authors, but  Mistaken is the first full-length novel from our group. Though I had no part in this novel’s creation, I’ve read it, and have seen Karen’s work in our weekly meetings. She is a devoted and conscientious author who writes with a keen sense of story.

I asked Karen to join me for this blog and share with you some of the history of Mistaken, which released earlier this week.

Tell us a little about the story: 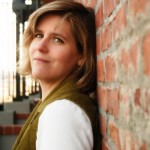 Since Prohibition has made criminals out of every man in her world, Laurie Burke resolves to find at least one honorable man to fill her life. Convinced that handsome newcomer Daniel Shepherd is connected with her brother’s rum-running gang, Laurie quickly scratches his name off her list. The new federal agent, Samuel Brown, might be more to her standards—or he might be her worst nightmare.

I chose the 1920s for several reasons. It was a time of great conflict and division in our nation. People were healing from the horrors of WWI and at the same time, struggling with the laws of Prohibition. You combine that with the fun styles, music, and cool vintage cars, and it’s the perfect time for great stories. Plus, so much has been written about the 1880s in America, I thought it would be fun to take a look at another era.

Not everyone will know the setting of Port Angeles. Tell us why you chose this area.

Port Angeles is located on Washington state’s Olympic Peninsula. The city is nestled between the Olympic Mountains and the coastline. I have family roots in that area, so I’ve been there many times. I remember standing on the beach as a kid and looking across the Strait of Juan de Fuca to Canada. It’s only about 20 miles away—a rumrunner’s dream.

What do you hope readers take away from your story?

I had no desire to write a fairy-tale, happily-ever-after type of romance novel. Though I enjoy a good love story, I think many books and movies portray a false idea about romance, suggesting we should be searching for the perfect soul mate who will never disappoint us. Scripture, on the other hand, teaches that we all sin and fall short of the glory of God (Romans 3:23). I wanted to write a story about deeply flawed people who learn to love each other, despite their failings.

I recently signed a contract with Abingdon Press to write a three-book series set in 1906 San Francisco. The first book, Out of the Ruins, will release in May of 2014. When Abby Fischer prays for a miracle healing for her dying sister, she never expects the answer to arrive in the form of Robert King, a handsome young doctor with big ideas about X-ray technology. But when Robert’s miracle cure fails, Abby’s grief is surpassed only by the chaos of the San Francisco earthquake and fires. Will Abby finally find God—and love—in the ruins?

Where do I start? For me, the obvious answer would have to be my husband. He’s been my main encourager, cheerleader, and prayer warrior. He also rarely complains—even when the house is a disaster or I ask him to pick up pizza on his way home. He often takes our kids on weekend outings so I can have writing time, and has been a huge support when I’m panicking about deadlines or questioning my own talents.

Mistaken is available from Amazon Books.com and CBD.com and your local retailer. Order it today. You won’t be disappointed.