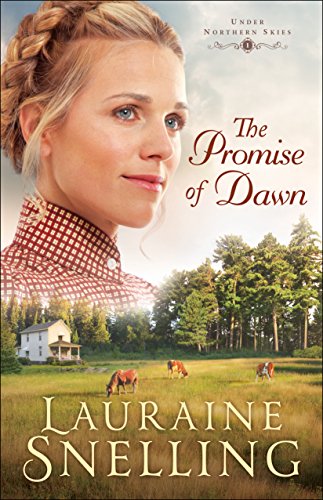 Few books that I read merit my attention to the point of me saying,“ I couldn’t put it down.”

This week, though, I finished book one in the series Under Northern Skies by Lauraine Snelling,  The Promise of Dawn. I have to say this story was one that kept me eager to sit and read more. I found excuses to read another chapter, and kept the novel nearby at all times. If I finished a task early I’d sit and read. That’s not me.

The characters demand attention. Signe Carlson’s struggles to adapt to her new circumstances after emigrating from Norway with her husband and three sons will tug at the reader’s heart. The  family has come to help an uncle and aunt prove up their acreage, helping them fell trees, clear farming land, and keep the farm running. Uncle Einar’s mean spirit, tough, will enrage any normal, feeling person. As a reader I wanted to leap into the scene and give the man a piece of my mind. How could one person be so cruel? As for Tante Gerd—well that is another matter entirely.

Here is what the promotional taglines say:

When Signe, her husband, Rune, and their three boys arrive in Minnesota from Norway to help a relative clear his land of lumber, they dream of owning their own farm and building a life in the New World. But Uncle Einar and Aunt Gerd are hard, demanding people, and Signe and her family soon find themselves worked nearly to the bone in order to repay the cost of their voyage. At this rate, they will never have land or a life of their own.

Signe tries to trust God but struggles with anger and bitterness. She has left behind the only life she knew, and while it wasn’t an easy life, it wasn’t as hard as what she now faces. When a new addition to the family arrives, Signe begins to see how God has been watching over them throughout their ordeal. But after all that has happened, can she still believe in the promise of a bright future?

If you want a great tale weaving early Minnesota history with the plight of immigrants seeking a new life, this book is for you. Even more exciting are the two sequels waiting to be read. I’ll keep you posted.