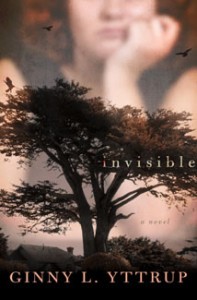 In the book Invisible by Ginny Yttrup, restaurant owner Ellyn DeMoss is a talented, overweight chef  running her own café and is well respected in her community. She has a gift for seeing the best in others, but can only condemn herself. When a handsome widower claims he is attracted to Ellyn, she doesn’t believe him, thinking there must be something wrong with the guy.

She makes friends with Sabina Jackson, a tall and slender psychologist—Ellyn’s physical opposite—who has come to spend a year healing, having left behind a husband, two daughters, and a thriving counseling practice. Ellyn thinks Sabina is doing more hiding than healing and attempts to draw her out.

A third player in the tale, Twila Boaz, is also struggling with personal issues, endeavoring to see herself as God sees her, rather than the invisible woman she has tried to become through an eating disorder.

Together the lives of these three women intertwine and each one discovers they are individual creations, made in the image of God. A compelling story about self-esteem and God’s power in the lives of those who dare to trust him, Invisible is a book well worth reading. Add the element of romance, and the delightful setting at the ocean’s edge in Northern California, the reader will enjoy a remarkable story.