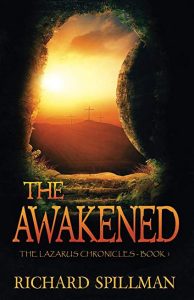 Few speculative fiction books with frightening content make the grade for my to-be-read pile, but this one’s premise captured my interest from the beginning. I’ve long known the biblical account of Lazarus, the man whom Jesus rose from the dead, but I’ve never considered what might have happened to that man after his encounter with his resurrection and the Lord.

The main story line takes place in contemporary time, but often takes the reader to parts of the world where major historical events have happened. I often found myself checking biblical facts to separate the fiction from the truth.

If you don’t believe me, try this excerpt from the back cover copy:

Two thousand years ago Jesus resurrected his friend Lazarus and founded a secret organization: SOAR.  Since then Jesus has added to the resurrected—The Awakened—to aid Lazarus in SOAR’s battle against Satan’s slaves, the UnVeilers. The threat is escalating. The UnVeilers have stepped up their attacks on mankind through a charming leader and devastating series of bombings in Dubai and Tel Aviv.

But the invasion doesn’t stop with international terrorism. The UnVeilers are searching for a secret that Jesus embedded in Lazarus’ journal that not even Lazarus knows—and it will determine the fate of mankind. After a failed cyber-attack against SOAR’s computers, Lazarus and his team of experts must find the secret before the UV do. What clue is he overlooking that could turn the tide of this ageless conflict?

The souls fighting with Lazarus are weary, but the war again evil is far from won. Can Lazarus and his team set aside their longing for heaven and put a stop to these satanic attacks before it is too late?

Don’t read this late at night or alone in an empty room. It will scare the pants off you.

Dr. Richard Spillman founded the Kingdom is Near (KIN) Ministries. Through KIN he has supported an orphanage in Uganda as well as a church/school for Kids from conflict zones in the Philippines. He has also taught in DTS for YWAM in Male, South Korea,  India and the Philippines.