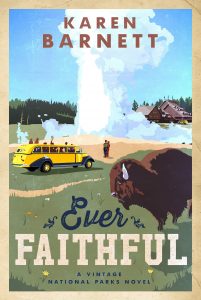 With summer winding down and fall gearing up its transition, you and your family would do well to spend some time at a national park before inclement weather and colder temperatures threaten to make the trip less appealing.

The National Park Service is now one hundred years old and is considered one of our nation’s greatest treasures. Majestic mountains, impressive waterfalls, and amazing collections of wildlife await visitors in many of the nature preserves the parks afford.

In Ever Faithful, the third historical romance in the Vintage National Parks series by author Karen Barnett, readers will discover through story the grandeur of Yellowstone. Set during the time when the Civilian Conservation Corps placed young, unemployed men in work forces designed to improve the parks, this tale will explore the kinds of challenges that came with that program. Main male character Nate Webber hails from Brooklyn, has never learned to read, and believes he has no future with his background.

Elsie Brookes has grown up as a park ranger’s daughter and has learned the ins and outs of park service at her father’s knee. She’s worked in the parks as long as she can remember and wants a future of her own. She doesn’t realize an opportunity to follow her dreams will come in the form of a crew assigned to her park.

Read this description from the book’s online page:

Vibrant historic Yellowstone National Park comes to life in this romantic mystery about a man hiding the truth, braving the west to become something more–and the woman who must confront his deception.

A man who can’t read will never amount to anything–or so Nate Webber believes. But he takes a chance to help his family by signing up for the new Civilian Conservation Corps, skirting the truth about certain “requirements.” Nate exchanges the harsh Brooklyn streets for the wilds of Yellowstone National Park, curious if the Eden-like wonderland can transform him as well.

Elsie Brookes was proud to grow up as a ranger’s daughter, but she longs for a future of her own. After four years serving as a maid in the park’s hotels, she still hasn’t saved enough money for her college tuition. A second job, teaching a crowd of rowdy men in the CCC camp, might be the answer, but when Elsie discovers Nate’s secret, it puts his job as camp foreman in jeopardy. Tutoring leads to friendship and romance, until a string of suspicious fires casts a dark shadow over their relationship. Can they find answers before all of their dreams go up in smoke?

Available at Amazon.com , Christianbook.com, Barnes and Noble,  and at local retailers,