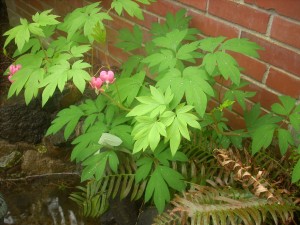 When I returned from Mount Hermon Christian Writers Conference in Felton, California earlier this week, I was greeted by several blooms of my bleeding heart plant which grows by our garden fountain. I thought it fitting that a heart-shaped flower should emerge the week before Easter, representing the love Christ showed for me when He died on the cross at Calvary.

In a culture which commercializes everything, including dressing grown men like white rabbits who now sit in malls and give candy to children, it is difficult to remember that the Easter season is a commemoration of sacrifice.  Jesus, a sinless man, sent by the heavenly Father, was brutalized by jealous religious leaders, condemned before a Roman governor, and forced to carry his own cross to a hill above Jerusalem where he was hung to die. No rabbit ever entered the story.

Crucifixion is considered by many the most heinous way to die. The victim is nailed to a wooden stake, hoisted into the air, and left to slowly bleed to death. The weight of his body compresses his heart and lungs, suffocating him.

Suppose for a moment they’d crucified a rabbit.  Nailed his paws to a tree. Can you imagine what would happen in our society? The Humane Society would appear in force, demanding restitution for the poor little bunny. Activists would lobby Congress to forever end any killing of rabbits by torture. The public outcry would rival the noise of an atomic bomb blast.

Instead, a man was tortured to death, and we celebrate with candy eggs and chocolate chicks, unaware that His sacrifice was made to cover the sins of the world. The shedding of his blood would wash away the unforgiveable, leaving in its place a restored human soul. All we need to do is ask.

Acts 16:31 says, “Believe on the Lord Jesus Christ and you will be saved.” God cared so much for you that He sent the one thing most precious to him—His only Son—to die a criminal’s death on a cross. His gift of love assures you of eternal life in heaven with God. It’s so simple, many people miss it.

Happy Easter. Be joyful that Jesus has risen from the dead and waits in heaven for you.

6 Replies to “Bleeding Heart–A Bloom in Time for Easter”