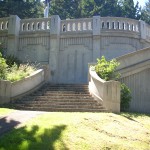 One of the most amazing sights of our journey to the southern Oregon coast last week was the breath-taking Conde McCullough Memorial Bridge spanning Coos Bay.  The last of a string of bridges built to complete the construction of Highway 101 in 1936, this structure is the longest—5,305 feet. Rising like a rainbow arching toward the sky, the bridge reflects the genius of its engineer.

Conde McCullough is known for the architectural designs of his bridges.  He believed these viaducts could be built not only economically and efficiently, but with beauty as well.  With money and labor coming from President Roosevelt’s New Deal programs—the Civilian Conservation Corps (CCC) and the Public Works Administration (PWA)—McCullough was hired to design and complete five bridges spanning Yaquina Bay at Newport, Alsea Bay at Waldport, the Siuslaw River at Florence, the Umpqua River at Reedsport and the one we saw at Coos Bay. At a time when our nation was recovering from the stock market crash and the Great Depression, McCullough’s bridges were a marvel of engineering—towering spires and arches, long viaducts, wide roadways and sidewalks—and were finished by 1936.

My husband drove to the base of the bridge where pedestrian plazas had been incorporated, areas designed to give people a place to view the structure. Built-in benches and winding stairs detailed in modern art motifs decorated both ends, the steps designed to lead the onlooker into a park. I stood amazed at the intricate beauty the engineer wove into what could have been just a concrete structure.

When I consider all the world around me, I know our heavenly Father appreciates beauty in His design as well. In an environment that could have been black and white, God brought color, art, and durability.

Psalm 8:3-6 (NIV) reads: When I consider your heavens, the work of your fingers, the moon and the stars which you have set in place. What is mankind that you are mindful of them, human beings that you care for them? You have made them a little lower than the angels and crowned them with glory and honor. You made them rulers over the works of your hands, you put everything under their feet.”

I can’t help but wonder if Mr. McCullough got his inspiration from the Author of design. 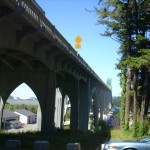