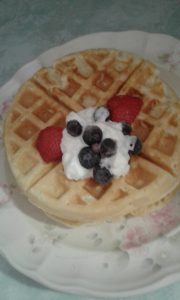 This morning I made waffles for Saturday breakfast.

I choose this day because I have a little more time to prepare and waffles tend to be more complicated than a bowl of cereal.  I’ve done it so often my family expects their weekend waffle as if it were a long standing tradition.

I like tradition. Certain factors in our lives bear repeating, as if connecting us to a ritual of stability that guides our lives.

As a family we have many—little insignificant reminders that we have ways of doing things. Holiday breakfasts are always cinnamon sticky buns. Fourth of July is hamburgers on the grill. We eat turkey for Thanksgiving and ham for Christmas. New Year’s Day, I  experiment, trying a new  recipe to celebrate the beginning of another trip around the sun. Not everything I’ve offered my crew has met with success. This year was one of those. A Polish dish with an impossible name turned out to be a food no one ate. I was left with a big square of it to freeze for later. It’s still there.

The Israelites had traditions. Every event of their history is remembered with an important holiday like Purim, the celebration of the destruction of Haman,the Agagite, who wanted to wipe out the entire race,  and Hanukkah, their victory over Antiochus IV who wanted to force Greek culture on the nation.  God knew His people were forgetful and needed to remember the times when He saved them from destruction. A factor important to their future survival.  Children were taught their history so each generation could move forward with faith in the God who helped those who went before.

Psalm 78:2-4  says: “I will teach you hidden lessons from our past— stories we have heard and known, stories our ancestors handed down to us. We will not hide these truths from our children; we will tell the next generation about the glorious deeds of the Lord,about his power and his mighty wonders.”

Tradition establishes the way we do things, where we place our trust. Breaking faith has consequences. This week we as a nation witnessed how a man sworn to protect and preserve our constitution betrayed that promise. He broke the policy of not leaving behind those we have tried to protect. Military was recalled. Lives were lost. Families left grieving. As a people, faith in our government was destroyed. Trust won’t easily be regained.

I can’t fix these failures. I can only pray that the American people will stand up, complain, and demand answers. Only then can our country return to its roots and stability be restored.

In the meantime, I’ll continue to make waffles.