The release of my newest novel, The Descendant’s Daughter, is now waiting on the horizon. While a contemporary story line carries the book, I get excited thinking about the historical theme that originated from my own personal family history. I consider the opportunity to share a fictional re-creation of my great-great-grandfather’s tale a privilege.  I hope you will enjoy it.

Rain dropped from the heavens like a pitcher pouring water when my great-great-grandfather and his party entered the Willamette Valley on November 3, 1847. Six months on the trail had left him weary. To arrive in the midst of fall’s annual deluge didn’t help his spirits. Astride his horse, he followed the river’s edge seeking the cabin of one of the first men who’d settled here.

Eugene Skinner, for whom the city of Eugene would later be named, had arrived a year earlier with three other men seeking Donation Land Claims of their own. Skinner chose land west of a butte that would later bear his name. The site paralleled the Willamette river where his ferry service would prove invaluable in future years. 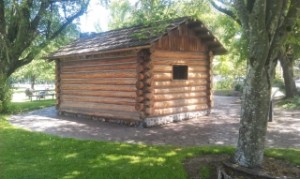 He built his cabin on the butte, overlooking the water, but the site was safe from any potential flooding. The cabin, a mere four hundred square feet, housed him, his wife and one daughter. Though not much room for strangers, the dwelling was a welcome sight for exhausted travelers, especially those like my great-great-grandfather who were drenched to the skin.

After spending the night with the Skinners, the men saddled up and rode to the homestead of Elijah Bristow, who had staked out his land near Pleasant Hill, about ten miles away. Bristow tried to persuade my great-great-grandfather to claim the acres adjoining his property, but he decided he wanted more isolation. Felix Scott, who had come north with Bristow, had claimed a spot on the south bank of the McKenzie river near the place where it met the mouth of the Mohawk. William Dodson’s claim lay northeast of the Bristow land.

Bristow told of many acres of fertile soil across the Willamette, an area frequented by Indians, but who didn’t stay . Using a small boat, my great-great-grandfather and a friend crossed the water at the middle fork of the river and found the land which would become his home. As a single man, he could only start with 320 acres, but down the road could add 320 more when a wife joined him.

He’d need to travel to Oregon City to stake his claim, but after crossing the prairies that last jaunt seemed like a trip across town. His new home awaited.

Watch for news of my cover reveal as well as dates of the book’s release. Get the news before everyone else by signing up for my newsletter. Christmas giveaway coming soon!