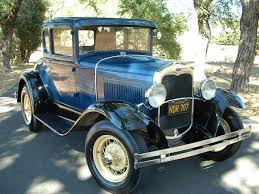 A summer day’s plans changed with the reading of a newspaper obituary.  Our family reunion would have to wait. My husband needed to pay his respects to a former supervisor, someone he’d admired and long held in esteem.

The church auditorium had nearly filled to capacity when we arrived. The lobby teemed with more who had come to honor  this individual’s memory. Gentle, but strong, here was a person who led by example, not by sheer authority.

He and my husband shared a love for vintage cars, and his restored 1930 Model A coupe, complete with a rumble seat, waited at attention outside, a car without its owner. The parking lot sported ten more antique automobiles, all lined up as if ready for a parade.

As guests were invited to share their memories, the stories repeatedly described the kindnesses this gentle giant bestowed on those he knew. The simplest of things—like taking a neighbor girl down the driveway in his old car. Offering a listening ear to a young teen whose father never did. Working alongside his employees so that the job was finished on time, not hounding them because he could. Using his authority to build up—not tear down.

This father of five had climbed his way to an administrative role, one step at a time. With a driver’s permit and a lack of others to help, he’d volunteered to drive the country school bus at age fifteen. He’d taught himself how to work out problems, and those who knew him said he could fix anything. He’d owned a gas station and managed a small farm.

In Proverbs 15:33 we are told, “Wisdom’s instruction is to fear the Lord, and humility comes before honor.”

Humility was a lesson this unassuming servant had learned well and lived as an example to all. He will be missed.