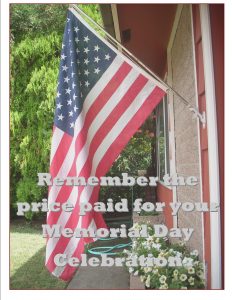 Barbecue, watermelon, flags—all signs that Memorial Day is upon us. For many the weekend signals the start of summer in the United States. Unless, of course, you are among the many states this year still plagued with snowfall and low temperatures in May. Summer may come a little later for you.

Traditionally Memorial Day, originally called Decoration Day, was established to honor the war dead of the American Civil War. Flowers were placed on the graves of those who had died in battle.  In 1868 John Logan, commander in chief of the Grand Army of the Republic, an organization of  Union veterans, proclaimed Monday May 30 as a day for that purpose.

After World War I observance of the day came to include all who had died in the nation’s wars and the original name of Decoration Day was changed to Memorial Day. National  commemoration of the day includes the laying of a wreath at Arlington National Cemetery as well as nationwide parades, celebrations, and speeches.

Early in our marriage my husband and I visited the 116-acre Punchbowl National Cemetery of the Pacific situated in Pouwaina, Hawaii. The site is an extinct volcano transformed in 1948 to serve as a resting place for soldiers of the American Armed Forces. On this weekend the acreage had been transformed. Boy Scouts decorated the 34,000 graves, a service project they perform every year. Locals distributed flower leis. Wreaths, ribbons and other memorabilia dotted the landscape.

The view stole my breath away.

Walking through the cemetery I could only imagine the history that lay beneath the headstones. Men and women rested here who had given all they had to help protect and preserve our nation’s integrity. At one gravesite, we noticed a package of trinkets.  At another, a Snickers bar. Specific memorials left for unforgotten heroes frequented our tour.

I’ve never forgotten that visit. Seeing that cemetery adorned in flags and the national colors impacted my thinking. To honor those who have paid a high price for the luxury afforded the rest of us to enjoy this day is a small price to pay. We would do well to remember.